Ndingatyei is an example of what happens when you lock up three bar-barians in the studio with a visionary producer.To all intents and purposes Chizzoe is a rookie but his feature list and two prior singles are evidence of a young king lurking in the shadows and sending mortal blows to the unfortunate when it suits him.Mile is something of an enigma choosing to sing rather than rap over his last records but activating beast mode when the rapgods come calling.Sharky was underrated for the longest time before winning best rap album last year but it seems the underdog hunger never left the boy who raps the monkey totem.Add to those three a young producer fusing traditional African instruments and sungura strings to trap bass lines and you have a banger and that's facts only.

The "rookie" Chizzoe goes in first with too many quotables to even list down.From his short time in the game and how he subsequently had the 5-0 getting yellow tape after murdering said game to how he has slayed so much to the extent of sending swords out of fashion Chizzoe is talented and he won't mince his words when he tells you as much.Mile doesn't tone the tempo down but goes in second with a quick dismissal of the gatekeepers gang trying to remain relevant with whack radio shows and whack blogs (wipes sweat from forehead).Mile is pretty content with his discography thus far but assures us he is taking it further than other rapper dudes spending money on the same feature verses,clubs and girls thus ending up stagnant.

Sharky handles the chorus and puts a traditional spin to it while summarizing the concept of the song i.e with this much talent the boys fear no man or alien for that matter.Greats who have taken to dabbing or biting his style to remain in the game get some subtle shade.Sharky is also confident with his new king title and reminds those  that think they can take it that they might as well have been born in the wrong generation.Overally the three emcees went bar for bar on an insane beat and the result is a young earquake every time one decides to spin the joint.
https://soundcloud.com/chizzoezw/ndingatyei-ft-mile-x-sharky-prod-by-victor-enlisted 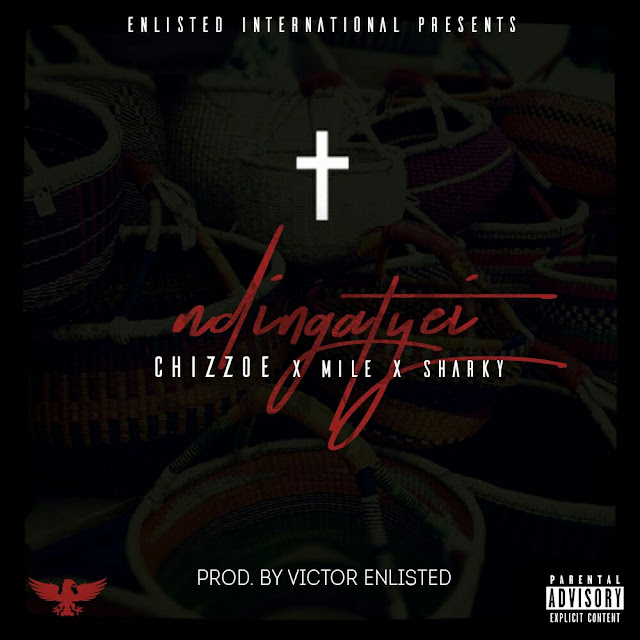