Sharky out to take back the land in profound sophomore album 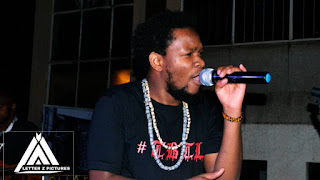 It's the 24th of June and a mix of heads and fans of Sharky (yes they are different) is gathered for the Soko Matemai anniversary at Courtney Hotel in Harare.Imagine their suprise when Sharky hits the stage and announces the event is actually a suprise launch party for his sophomore album.Titled Take Back The Land Sharky's second album is a mix of topical issues in Zimbabwe across all landscapes from music,economics,social life and even the political arena with an equally fused sonical texture which sees urban meeting African instruments and Shona existing side by side with English in equal measures.Buckle up as we attempt to dissect what the album is really about (Sharky is on record saying it's about every individual claiming back their source income and using that to enrich literal and mental pockets hence the land in this narrative is a representation of wealth in general)
Stream Album here
On King we have Krimz on production and Zifm dj PD on the intro detailing how he said some not so nice things about Sharky in the past before telling us he believes Sharky will be a top 5 African artist within 2 years.Soko then goes in and basically talks his shit on the thumping beat with his signature lyrical dexterity.He points out that by pioneering a new sound he is low key inspiring emcees old and young but he ain't about to smile for pictures yet even though his focus is so Kodak.A good King will occasionally give his minions a word of advice and Sharky advices his peers to stop being fed props without monetary gain as they will die hungry. 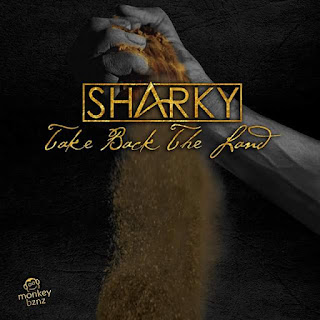 Family sees Sharky taking off his "crown" to try and better understand the African family dynamic through the tale of a wife forever crying foul about an irresponsible husband who drinks away their savings and never chips in as far as the welfare of the family is concerned.The hubby comes through on verse two very apologetic and aware of the wrongs he has done promising to step up and do better.Sharky then details how he grew up uneasy about his broken family before interactions with friends showed him his case was hardly unique as infidelity and absent parents rendered every second home disjointed.With this worrying trend and his personal experiences Sharky wonders what will become of his own family when he finally settles down.

Ndambakuudzwa with it's sungurasque beat sees old man Sharky in an advisory role to hard headed peeps who refuse advice.First up is a young male who sleeps his life away expecting his mother to take care of his every need,Sharky reminds said male that one day they shall wake up having wasted irreplaceable time and regret shall be the order of the day.He also chastises a young lady who speaks in tongues at church then uses a sweet tongue to hustle guap from dudes and asks if peharps the city has become too hot for her seeing as she is always barely dressed.This warning to change one's ways before Karma comes knocking is delivered in an uncorny way and the chilled Krimz beat is the perfect companion for the wise words.

Homu Homu is the only joint with a feature and it's none other than Italist Sharky's blood brother whose genre of choice is Dancehall.Homu is the monkey war cry and a not so gentle dismissal​ of those who claim a past Sharky wasn't in is better than the present he is in.Marshal (he does have a government name) speaks on starting his own corporation Monkey Bizness because corporates weren't willing to endorse him.He chides forever claiming it's their season rappers and calls out OGs who lack talent but persistently push lackluster projects down people's throats.This theme of talent or lack of it thereof is further explored in the trappy #2 which sees Sharky basically announce that his second album will shut everything down a claim not to hard to believe with the amount of quotables on the joint. 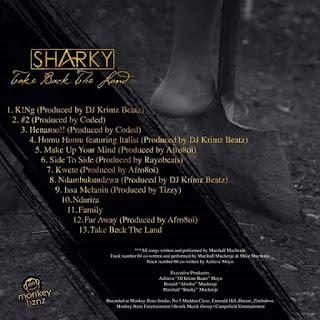 Coded is roped in for production on Henaro a Shona exclamation oft used to welcome greatness.Here Sharky flexes about the amount of sawce he has and how people fiend for his deep Shona vocabulary before calmly wearing the robes of a thief and declaring he will steal the spotlight on any given day.Coded's partner in crime at Hitmen Rayo produces side to side a groovy love joint dedicated to the Queen fit for the King he is who has mad him lose his mind by her royal sway from side to side.
Issa Melanin is a celebration of black excellence and Sharky drives this point home by likening himself to a "Gange Mukange" an extremely black ant which lives on after death through the smell it exhudes.On kwete Sharky uses an almost jazzy meets poetic approach to talk African values including Ubuntu,sense of community and warns that disunity and selfishness will come back to bite their perpetrators one day when they themselves seek help.We also get Sharky the instrumentalist as he exchanges bars for the mbira on Ndarira.

The title track is peharps the realest song by the young emcee yet and it's an 8 minute long analysis of the Zimbabwean economic, political and social landscape with threadbare hums providing the only instrumentation.The rich who lost the plot and grabbed four literal plots to the fake deep youngins who think they can coin change with hashtags and witty tweets are told off and activists are told "Itai,dzamara" y'all meet your objectives even as their peers disappear like Itai.He proclaims he is a soilder of the truth and if they Stone him he will turn builder and build a fortress before preaching a change of mindset based on indipendence from outside influences be they from the West or East when it comes to wealth creation.He is steadfast in his desire to influence generations losing hope in the face of seemingly unanswered prayers to own their hustles and Excell lest they cry foul like precolonial Africans whose land was taken or the colonial masters when the Africans took the land back.
The project is available on iTunes and there is a streaming link on Sharky's website 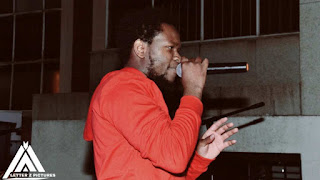