Donald Dodger Marindire at September 25, 2018 Randomness, ZIMURA,
Theft and Intellectual Property are two twins whose destiny is intertwined and as such its essential to have laws and organisations in place that will curb the theft of one's hard work while making sure appropriate payment is made to composers.In the Zimbabwean context that organisation is ZIMURA which was founded in 1982 in Harare before regional branches were opened in Bulawayo,Mutare,Marondera and Chinhoyi.ZIMURA gets its power from the Copyright and Neighbouring Rights Act and its mandated to manage the rights of the composer while making it easier for end users of music to pay for art they consume through issuing a Copyright Music Licence.Since it is physically imposible for an artist to check which individuals and organisations are playing his music ZIMURA steps in by collecting royalties from Radio stations,Television Stations,Businesses and Individuals which it then distributes to members.


You should consider joining as a composer member if you are a creator of an original song or piece of music (including writing lyrics and musical notation).


• $50 registration fee - non refundable
• 2 recent driver’s license size photos colored
• Photocopy of ID
• Photocopies of agreements if any with publishers or joint ownership
• Copy of CD – finished and published
• A minimum of eight songs
• Where the artist has less than eight required songs, a minimum of two original compositions enjoying airplay will make the artist eligible to register.
• Musical profile
• Banking details
• Valid contact details (phone numbers, addresses)
• Death certificate if applying on behalf of a deceased person. Death certificate should be accompanied by the copy of an affidavit signed by immediate family members stating that they have resolved to have the stated name to be the beneficiary of the deceased
Sleeve information:
Name and address of recording studios and publishing houses
Names of producers of the music
Duration of each song
Names of composers
Commercial number – e.g. CD BTB 001
Copyrights statement on CD
NB: Registration on Mondays and Wednesdays only. Time: 9:00am – 4:00pm
For more information call or send WhatsApp message to +263775 709 650
E-mail: zimuramembership@gmail.com


If you have entered into an agreement with a writer to exploit their works to benefit both parties, you should consider joining as a publisher member.


1) A specimen of the contract (Deed of Assignment) that the Company uses in obtaining rights from composers/authors/arrangers.


2) A list of the titles of all the musical works in respect of which the Company has obtained rights from composers/authors/arrangers, indicating the names of


3) Copies of all contracts (“sub-publication agreements”) whereby the Company has acquired rights in musical works in its catalogue to foreign publishers.


4) Copies of all contracts (“sub-publication agreements”) whereby the Company has assigned rights in musical works in its catalogue to foreign publishers.


6) Copies of Company’s Certificate of Incorporation and Memorandum and Articles of Association.


7) Copies of the cassettes/ compact discs. 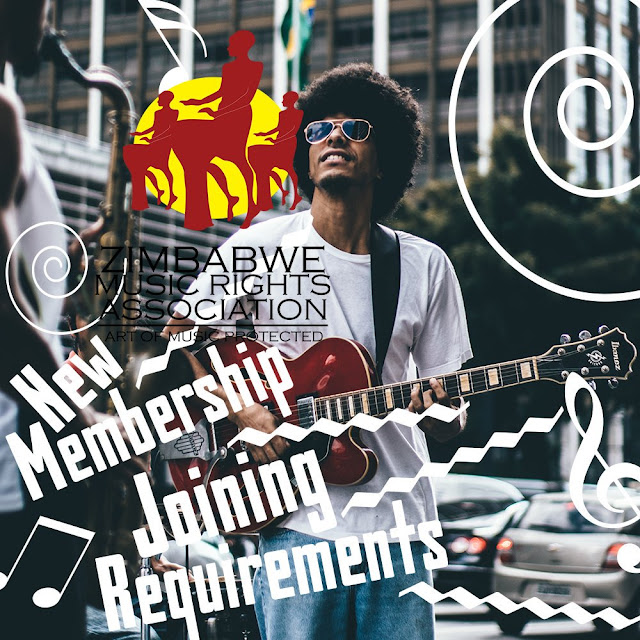