Inside Friday Nights Sunday Mornings:VI the Law gives a detailed analysis of the thought process behind his collaborative project with Drissy Parker

Donald Dodger Marindire at October 05, 2018 Reviews, Zim hip hop,
The FN/SM story starts in May 2017 when I linked up with Drissy over  twitter.  Interestingly enough we’re both half Nigerian and make music, so that’s how initially we connected haha, he had  just dropped a project and I was in the middle of releasing a wave of singles under my Six Saturday’s series. So we had talks about collaborating on one song produced by him because his sound is definetly a late night vibe  sorta sound and I was keen on putting out a record with that aesthetic . I had previously dabbled in the sound a little bit but to push myself out of my comfort zone I thought his sound would be the perfect fit. On my own production tip I was in a creative space to create  “hardcore” hip hop sorta beats to rap over. We then agreed that he would send over some samples then we would run with whatever I liked most. In my mind I already had the concept and title for “Friday Nights/Sunday Mornings” .

After sampling the beats I decided I liked all of them and we might as well put out an entire project. I communicated this to Driss and he was down with the idea and then I got down to writing and recording. So first song recorded was “You Don’t Need Me” followed by “Distractions” and then “Playing Possum”. This sums up the tracks that I recorded for the project in 2017. As life would have it and being the eclectic creative I am I ended up being side tracked by numerous other songs and projects, lol so for a while the songs lay dormant as fruityloops files and wav files in my computer. I then got started working on another full length project , this is now in 2018 after releasing singles (Hectic, A Song For Her, For The Community) and also the first mixtape from my mixtape series “The VI League”.  While I was working on that project I recorded ANOTHER full length project with a young rapper currently based in South Africa so in theory at that point I was sitting on three projects (now two lol). So the main project I was working on hit a creative snag and I started looking for some new energy. One fateful  Monday I was in studio and was playing songs off each of the projects for some friends and they REALLY vibed with Friday Nights. At that point I was a little hesitant about releasing the project because it was quite different from the general vibe I had been releasing but after a while of not really listening to the songs and now listening to them again and watching the way people in that room reacted to them  gave me the gut feeling that this is the direction I should take.

The idea was always to have the project be short so I knew I already had 3 solid songs so I would add 2 or 3 more to tie things up. As an individual with a turbulent love life I had sufficient jet fuel to write the songs  so I hit up Driss and requested even more beats and mans delivered. I got to work writing “Strangers With A Past” and “Chest Pains”. Space came about from me chopping a sample and adding a synth bass but I couldn’t figure out what drums to put so I sent it to Driss and he hit me up 10 mins later with a “Check Your Mail” message. Now the project felt right. Now I knew that beats and the lyrics felt right but what would make or break the project now would be the mix. Now intention was definetly to put out a project that’s internationally competitive, so I took it upon myself to study projects with a similar aesthetic and to be frank it narrowed down to OVO projects from out in Canada to the work of Bryson Tiller & 6lack. Sidenote is I wasn’t hearing music like this coming from Zimbabwe…something raw and edgy like this.
With all my projects I definetly push for a cinematic feel, so that it sounds and feels like a movie, blending in various textures and effects not only to create the right amount of excitement for the listener but empathise with my message. To emerse themselves in the story line. With FN/SM I also experimented a lot with my voice, definetly  lot of singing and effects on my voice transforming it into an instrument or element in the mix.
So the plot of the project is an unhealthy situationship that transpires over a weekend.  It tells the tales of the ups and downs and eventual catharsis of a character going through the motions of coming to grip with issues of intimacy. “Playing Possum” is where we start off, the title derived from the way possums in the wild can play dead when a threat is in the vicinity such as a preditor. It also funny enough is a term that is used in wrestling when a wrestler pretends to be passed out only to be secretly plotting an attack. This is obviously WWE not Olympic wrestling lol. In the context of the project  it is the feelings between the boy and the girl that are Playing Possum.  The know they like each other but their feelings are playing dead because they are both scared of being Hurt.

“Distractions” starts of with a voicemail message from a rather upset woman, and the song is generally about how we love our Distractions hence the chorus going “Distractions Can’t Distract Unless Its worth It” The Only reason its able to divert your attention is because maybe on a subconscious level you believe it fulfills a certain need. It also addresses the issue of responsibility which is a theme throughout the project , taking responsibility for one’s actions instead of blaming the other party .
“You Don’t Need Me” is a reflection on the good times before things go sour and  dealing with rejection. It also has the sound effect of people making love to further emphasize this. This is a song based on my personal experience of coming to terms with rejection and how certain themes seem to repeat themselves in my love life over time. The whole project is a blend of my personal experiences, things friends  have gone through and general themes I wanted to investigate. Of all the songs on the project this is the most personal.

“S.W.A.P  Interlude” starts of with a message from my good friend Keith JFK asking about the girl I liked and the progress I’ve made with  her. S.W.A.P stands for Strangers With A Past, and its mostly about being in denial about rejection and lashing out. This can be seen through the verse. Its just a guy who’s hurt and you know how it goes “hurt people hurt people” . Its also about how as guys we confide in our friends about how we feel about  these girls but our feeling s are “Playing Possum” when we’re with the actual girl so that was the main idea behind placing Keith’s voice message at the beginning.
“Chest Pains/Space” was a great experiment because I have always wanted to to a song that completely changes to another one in the middle. Chest Pains is uptempo.. and continues with the tirade from S.W.A.P but this time there’s some hope because its more of a realization that we both have issues and I can’t really solve yours, neither can you solve main and maybe this whole time I’ve just been hurting myself.  As the song switches to Space we have a voice message of a girl calling it quits on a relationships which is followed by an eerie beat switch.  The verses on space are a general  overview of the themes above leading to the resolution that is the outro at the end of space. The concept of Shakespeare’s Romeo and Juliet being considered a work of satire was derived from a book I was reading while making the project called “The Subtle Art Of Not Giving A Fuck” by Mark Manson. This book greatly influenced the thought process of writing “Space”

In conclusion Friday Nights/Sunday Mornings is the title of the project not because all the events mentioned above happened in chronological order till Sunday Morning but its more of a screenshot of the status quo of the times we’re living in as young adults and the issues we are likely to go through in a relationship…be it a situationship, friends with benefits, fuck buddies etc  and these things generally tend to happen over the weekend. The intention was to capture the ultimate millennial weekend using a cocktail of issues we all generally can relate to or at least I hope so. The intention was also to encourage a spirit of responsibility…to take responsibility for our inner space. 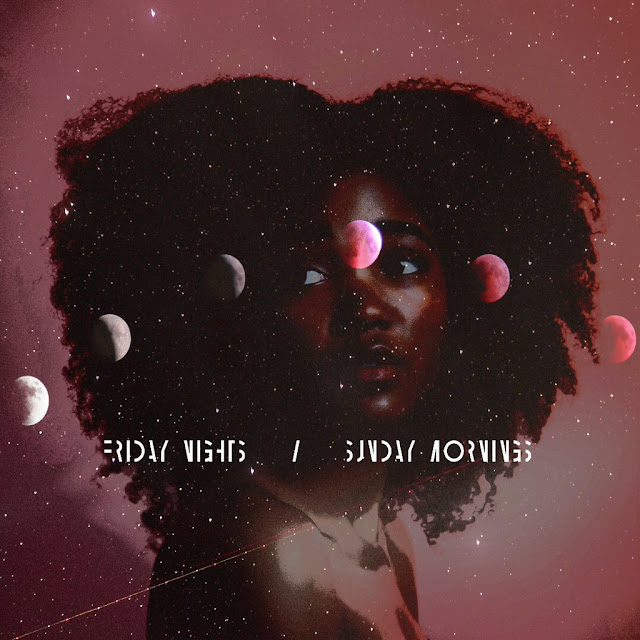