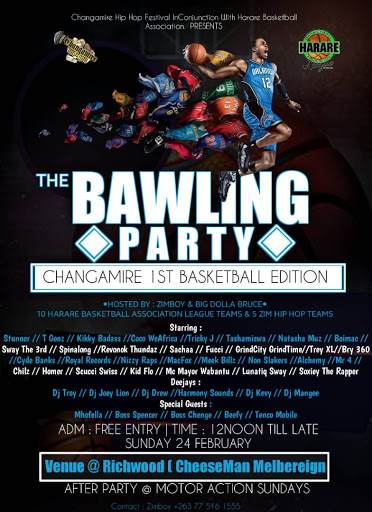 Jackson De Zimboy recently held the fourth annual Changamire Hip Hop Festival Awards at Club Sankayi in Harare.The awards showcase which Zimboy uses to showcase his gratitude to brands and stakeholders aligned to his had over 30 categories  with some categories having as many as 10 nominees.Most winners were deserving considering the work they put in the past year but some categories definitely felt like a Zimboy price giving ceremony for his cronies and homeboys.

On the sidelines of the event Zimboy announced an allstar basketball game for slated for the next Changamire Hip Hop Festival which tends to happen on the last weekend of each month.The game will see rappers from all over the country showcase their ball skills before hitting the stage for perfomances.

The inaugural Bawling party is set for  Cheeseman Malbereign on the 24th of February with the afterparty being held at Motor Action.A pool of 15 basketball teams are expected to compete with 10 coming from the Harare Basketball Ascociation and a further five made up of members from the Zim Hip Hop fratenity.Shout out to Zimboy for consistently finding new ways to push the game foward.

4.Song of the Year - Mambo by Asaph feat Tha Dawg and Fish McSwagg

11.Personality of the Year - Stunner